Vincent Van Gogh is definitely one of my favorite artists and the one I feel I can relate to the most. Apart from sharing the love for a bit exaggerated, magical colors and shapes, we unite on battling the same monsters. Depression, anxiety, bipolar disorder, constant self-doubt and lack of confidence in his abilities and his works. I have experienced very similar feelings and fears since my adolescent years and battled them with varied success over the years. But, this post is not going to be about depression or sadness, on a contrary, there is a positive point I want to make.

I have done extensive research on the painting, the artist, his life, vision and meaning behind the painting and I want to bring the most interesting facts, quotes, and bits and pieces of information I found across many different sources.

Just as Van Gogh, I’ve always been attracted to the night. To him night was ‘more alive than the day’ and was the time of creativity, reflection and meditation after a day of activity and it brought with it a feeling of security and comfort. It was also kind of metaphor for the cycle of life. And he linked this with the changing of the seasons. However, van Gogh was aware that darkness could also conjure up feelings of loneliness and anguish.

The night sky  is mesmerizing. It looks as the stars in the painting are swirling and moving within it’s frame. You feel captured in this magical place and you don’t want to leave. ‘Starry night’ is the mixture of imagination and reality. While the village and location of the stars in the sky might reflect what he really saw from his window at a hospital in Saint Rémy, the church resembles with his memories of his motherland, the Netherlands.

When he looked at the night sky, he wrote to his brotherTheo in August 1888, he saw “the mysterious brightness of a pale star in the infinite.”
As he wrote to his sister Willemien van Gogh from Arles, “It often seems to me that the night is even more richly colored than the day, colored with the most intense violets, blues and greens. If you look carefully, you’ll see that some stars are lemony, others have a pink, green, forget-me-not blue glow. And without labouring the point, it’s clear to paint a starry sky it’s not nearly enough to put white spots on blue-black.” (678, 14 September 1888) 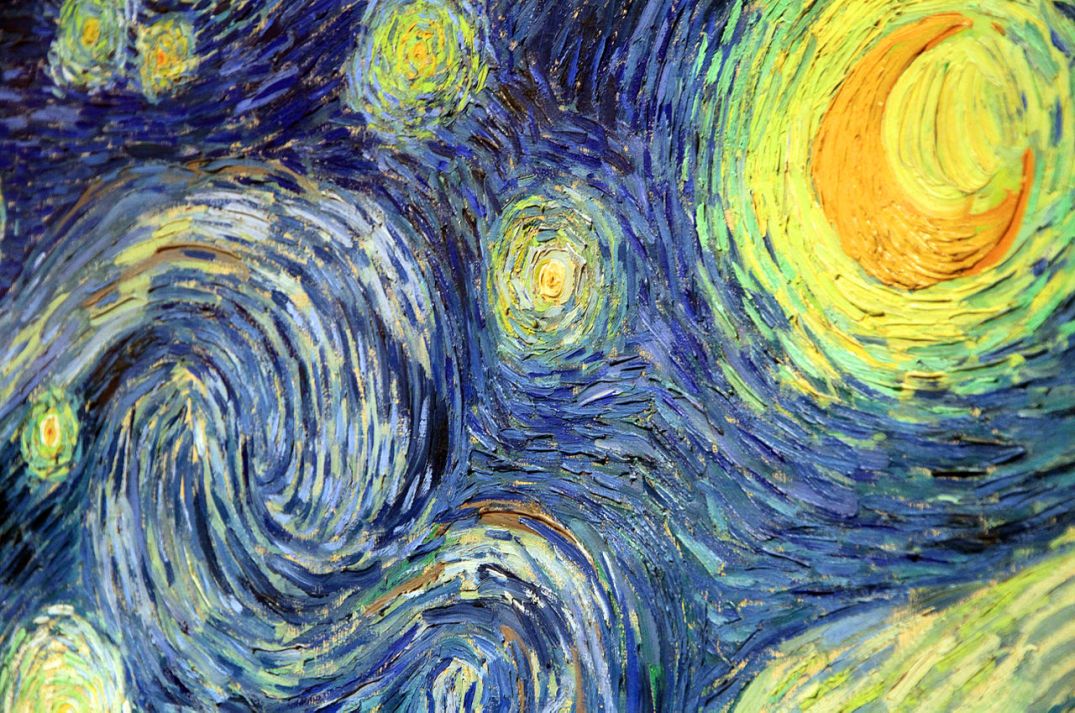 In a letter written to Émile Bernard in April 1888, Van Gogh expressed his desire to paint the night sky, and questioned whether he could achieve his intention by painting from nature as the Impressionists did:

The imagination is certainly a faculty which we must develop and it alone can bring us to creation of a more exalting and consoling nature … A star-spangled sky, for instance, that’s a thing I would like to try to do … But how can I manage unless I make up my mind to work … from imagination?

In Arles, in 1888 and 1889, van Gogh’s paintings took on a mystical, dreamlike quality. Straight lines became wavy, colors intensified, thick paint became thicker, sometimes squeezed straight onto the canvas from the tube. Some of these changes were later taken as a sign of his madness, and even van Gogh feared that “some of my pictures certainly show traces of having been painted by a sick man.” But there was premeditation and technique behind these distortions, as he tried to put a sense of life’s mysteries into paint. In a letter to Wil, he explained that “the bizarre lines, purposely selected and multiplied, meandering all through the picture, may fail to give the garden a vulgar resemblance, but may present it to our minds as seen in a dream, depicting its character, and at the same time stranger than it is in reality.”

The artist’s focus on the relationship between dreams and reality—and life and death—had a profound meaning for him, as he had confided to Theo in a letter a year before his first crisis in Arles. “Looking at the stars always makes me dream, as simply as I dream over the black dots representing towns and villages on a map. Why, I ask myself, shouldn’t the shining dots of the sky be as accessible as the black dots on the map of France? Just as we take the train to get to Tarascon or Rouen, we take death to reach a star.”
“And these trees that are drawn almost like flames of fire very much allude to Van Gogh’s ongoing concern with afterlife, with eternity, with death, and with all these different forces, which indeed he does associate with the night.”

There are various interpretations of Starry Night and one is that this canvas depicts hope. It seems that van Gogh was showing that even with darkness it is still possible to see light in the windows of the houses, and with shining stars filling the sky, there is always light to guide you. It seems that van Gogh was finally being cured of his illness and had essentially found his heaven.

Another popular theory is about the biblical meaning behind the ‘Starry Night’.

Perhaps the real reason why the Van Gogh painting is so famous and appreciated today is not due to the negative emotions that may have initially inspired the artwork, but the strong feelings of hope Van Gogh conveys through the bright lights of the stars shining down over the dark landscape at night. In 1888, Van Gogh wrote a personal letter in which he described “a great starlit vault of heaven…one can only call God.” With a theologian for an uncle, Van Gogh himself was also religious, even serving as a missionary in his younger days. Many art scholars believe there is a hidden religious meaning to Starry Night. In the painting, the moon and stars in the night sky are surrounded by large halos of light while a church steeple stands out above the smaller, less detailed buildings in the town below. In fact, some art critics find a biblical meaning in the number of stars painted in Starry Night that alludes to specific Bible verse in Genesis.

Then he dreamed still another dream and told it to his brothers, saying, “Look, I have dreamed another dream. And this time, the sun, the moon and the eleven stars bowed down to me.” Genesis 37:9

In a letter to his brother, Theo, van Gogh refers to Leo Tolstoy´s book My Religion and its lack of belief in resurrection. His use of the word ‘quiet’ and reference to Tolstoy´s book indicates that the night sky made him feel calm and brought to mind eternity.

Why did Van Gogh paint exactly 11 stars? By painting exactly eleven stars in the Starry Night painting, Vincent Van Gogh might have been directly referencing Genesis 37:9, a key verse in the biblical account of Joseph, a “dreamer” and an outcast in the company of his eleven older brothers. It isn’t hard to see why Van Gogh might have identified with Joseph in the Bible. In the Bible, Joseph was thrown into a pit, sold into slavery, and underwent years of imprisonment, much like Van Gogh did the last years of his life in the Arles asylum. No matter what Joseph did he could not receive the acceptance or respect of his 11 older brothers. Likewise, despite his best efforts, as an artist Van Gogh failed to receive the recognition of art critics of his day.

Van Gogh considered his now-iconic The Starry Night, which he painted from his barred window at Saint-Rémy, a failed attempt at abstraction. Before leaving Saint-Rémy, he wrote to Émile Bernard: “I have been slaving away on nature the whole year, hardly thinking of impressionism or of this, that and the other. And yet, once again I let myself go reaching for stars that are too big—a new failure—and I have had enough of it.”

Theo liked the painting but was worried. He wrote Vincent that “the expression of your thoughts on nature and living creatures shows how strongly you are attached to them. But how your brain must have labored, and how you have risked everything….” Vincent didn’t live to know that in his reaching for the stars, he had created a masterpiece.

While Van Gogh died a poor and disrespected artist, he is now one of the most famous and reproduced painters today. Within the madness, there was genius.

“It is inspiring to see how a man so plagued by sorrow and despair could turn his inner battles into glowing, vibrant canvases that still speak a message of hope and joy more than 100 years later”

Following the recent news on Robbin Williams death, I spent a lot of time thinking about how many lives could have been saved, how many wonderful things could have been created, if they did find the strength to say to themselves: “I am strong. I am valuable. I am worthy”. If only they knew the impact they have on the people around them, on the world and the Universe. If only they could see their problems from the perspective of eternal starry night sky. If only there was a family member or a friend holding their hand that would tell them: “I care for you. You are loved.”

If you came across this post and you’re battling depression and anxiety, I want you to know that I love you and you’re not lonely.  While I’m battling my own hardships, I understand what you’re going through and you can reach me out to vent, to cry, to smile and laugh and while I’m no specialist, I will hold your hand and give you all the support I can give. My e-mail is 1happyblog@outlook.com.

If you have a family member, a friend or anybody else suffering from mental disorders, please don’t just ignore them. A lot of times we are seen as people with ‘personal weaknesses’ or ‘drowned in self-pity’ and our condition is not taken seriously. There are times when we cannot help ourselves and if we could, do you really think that we would stay depressed and miserable? Sometimes, a small gesture, a nice word or just being by our side, can mean the world. Spread some love and I’m sure it will come back to you multiplied.

For more inspiration, I urge you to watch Doctor Who: ‘Vincent and the Doctor’ (Season 5, Episode 10). It literally brought tears to my eyes.

I’m going to leave you with a tribute to Vincent, a song called ‘Vincent (Starry, Starry Night)’ by Don McLean.

Starry, starry night
Paint your palette blue and gray
Look out on a summer’s day
With eyes that know the darkness in my soul

For they could not love you
But still your love was true
And when no hope was left in sight
On that starry, starry night

You took your life, as lovers often do
But I could’ve told you Vincent
This world was never meant for
One as beautiful as you

They would not listen, they’re not listening still
Perhaps they never will

Beautiful soul, Vincent, I know I’ll meet you one day somewhere across the Universe and we’ll paint the sky purple and yellow.

One Happy Blog is about arts, personal development, spirituality and everything else that helps us live a happy and balanced life!